During a recent holiday to Vanuatu, I (along with my son and brother-in-law) took the

opportunity to do five dives with Nautilus Watersports in Port Vila. While most people who go to Vanuatu for a diving holiday target ‘Million Dollar Point’ and the ‘President Coolidge’ on Espiritu Santo as ‘must do’ dives, our budget (in both money and time) did not permit such a luxury. I am happy to say that there is plenty of excellent diving in and around Port Vila that will satisfy most eco-tourists.

Prior to departing for Vanuatu I had been in contact with Nautilus Watersports and after an exchange of emails over a period of time we agreed on a dive program of five dives over three consecutive days which allowed us to complete the dives and fulfil our no-fly penalty with plenty of time to spare. The total cost per person for the five dives equated to NZ$300.00, so at NZ$60.00 per dive it provided good value for money. Additional costs included $50.00 per person for the Air New Zealand additional sports baggage allowance and another NZ$35 for the obligatory polo shirt.

Dive One − ‘The Cathedral’

If you are staying at one of the resorts in or around Port Vila, Nautilus Watersports will pick you up, but as we were staying at a private holiday home some distance out of town we had to make our own way to the dive shop by 0730hrs (FGS − don’t they know we’re on holiday).

After filling out the usual paperwork (Liability Disclaimers and Medical Questionnaires) we headed down to the gear shed to grab a wetsuit and some lead. I had already told them that my brother-in-law was a notorious air hog, so they had a couple of 15 litre steel cylinders ready for him. 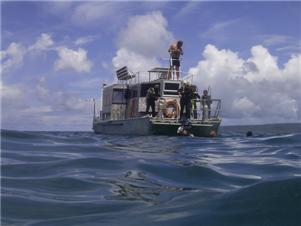 We then boarded the ‘Cowrie’ (the ugly-as-sin but very functional dive boat) along with seven other divers, four dive guides and the boat master who would be accompanying us for the morning. As we headed out to our first dive site, ‘The Cathedral’ about 40 minutes away we were given a safety brief and a dive brief. We were told to be ready to hit the water as soon as we arrived as there was no mooring available and it was likely there would be a bit of a swell and we would be dropped close to the exposed shoreline.

Despite the 27_C water temp, it was recommended we dive in 3mm full wetsuits (the guides were in 5mm but three of our group decided to dive just in their boardies). I made sure I was ready to go as soon as we got to the dive site and was one of the first into the water to cool off. The was quite a current running so by the time the rest of the divers had entered the waterwe had a bit of a surface swim to the descent point.

As soon as we started our descent I saw a ray swimming along the bottom which was 26 metres below us − awesome viz. Once we got to the bottom we met up with our assigned guides, however our group ended up getting reassigned as one of the others had difficulties during the descent and ‘called’ the dive, so our guide returned to the boat with her. By now the current that we had encountered on the surface had taken us off target so we had quite a swim along the bottom to the cavern entrance all the time sucking up our precious air supply. We entered the cavern in separate groups waiting for the previous groups to come out before we went in. Although it is called a cavern, it is better described as a rift and my immediate thought was how it reminded me of Sawcut Gorge back in Marlborough. The cavern was probably 30 to 40 metres deep (from front to back) and the sunlight filtered through from the surface creating a surreal effect, the photos do not do it justice.

All too soon our guide was motioning for us to exit the cavern and commence or ascent. As we made our way up the near vertical wall he pointed out items of interest including small coral growths and marine-life that would have otherwise gone unnoticed. We performed two safety stops, the first for 3 minutes at 5 to 6 metres and the second for 2 minutes at 2 to 3 metres, then made our way to the surface where we were picked up by the ‘Cowrie’.

Once back on-board the roll-call was taken and we headed off to our next dive site which was the wreck of the ‘Konanda’ about 25 minutes away.

discussing the various sights we saw on the dive. Those who had decided not to take a wetsuit appreciated a hot drink as they were feeling the effects of the water temperature towards the end of their dive. As we neared the site, we prepared for the next dive, changing cylinders and getting ‘suited and booted. There was a slight delay once we arrived at the site as another dive outfit was tied up to the mooring.

The ‘Konanda’ was a 45 metre long inter-island trader which was damaged in a vicious cyclone. She was sunk in 1987 in 26 metres of water on a flat sandy bottom after being carefully prepared so that penetration dives of the wreck into the cabins and holds are safe. The mast, derricks and rigging reach up to within 10 metres of the surface. After entering the water we followed our guide down the mooring line which was attached to the top of the mast. We then followed the mast down to deck level and headed to the bow. After the girls had done the cliche ‘Titanic’ poses at the bow we head back to the forward hold and made our way through the holds to the accommodation area. We then checked out the bridge and made our way through the corridors and cabins to the back of the ship.

During the dive brief, our guide mentioned that we would meet on the top of the bridge and have a cup of coffee. True to his word, we made our way forward again and made our way to the top of the bridge and sure enough, there was a setting of cups, saucers, plates and a teapot waiting for us. As we were now nearing the end of our dive we headed back to the bottom of the mast and slowly ascended up it. Once again, during the ascent our guide pointed out marine-life that otherwise would have gone unnoticed.

We then headed back to the surface completing the 5 and 2 metre safety stops.

Once back aboard, a roll call was held again and we each signed a dive-log proving that we had surfaced safely.

Note: The photgraphs were kindly provided by Nautilus Watersports and the article was written by Michael Black

To be continued next month…

This site uses Akismet to reduce spam. Learn how your comment data is processed.

A Bit about Scuba Diving Vanuatu