Last month I commenced an article on our dive experiences in Vanuatu while on a recent holiday. This month I wrap up the story with a report on the other three Dives that we did on ‘Ollie’s Lolly’, ‘Mele Reef’ and ‘The Twin Bommies’.

Day two commenced the same as day one with an 0730hrs start at Nautilus Watersports. We were ‘old-hands’ now and knew the drill. Nautilus Watersports offers a secure lock-up for your dive gear if you are doing multiple dives over several days and after rinsing our gear the day before we had taken advantage of this ‘free’ service. So after finding a staff member to ‘unsecure’ the secure lock-up we proceded to load the ‘Cowrie’ with our gear. While we were doing this, the company shuttle turned up after its run around the resorts to pick up the days customers. There were a couple of familiar faces from the day before, as well as a couple of new faces, giving a total of seven divers for the day.

It didn’t take long to load the ‘Cowrie’ and we were soon on our way, steaming out of Port Vila harbour into Mele Bay. After the now familiar safety and dive briefs, we were left to our own devices to fill in the half hour or so it was going to take to get to our first dive site. I elected to head up onto the roof to get some vitamin D and it wasn’t long before we were advised to get ‘suited and booted’ and prepare to enter the water.

Our first dive site of the day was named ‘Ollie’s Lolly’ which was a large reef that starts at 10 metres and heads down to a maximum depth of 25 metres. As we were a smaller group than the previous day we went as a single group with one of the staff leading and the rest of us following and another two staff members following behind. We initially dropped down onto the top of the reef at 10 metres and then followed a rift in the reef down gradually getting deeper until we were around the maximum depth. The first thing I noticed was the large expanses of dead coral. I found out later that a tropical cyclone had ripped through the area back in February which killed off most of the coral. It was amazing to see the new re-growth coming back.

It was during this dive that I finally ‘found Nemo’. This was the third island holiday I had been on in recent years and the first two (Rarotonga and Samoa), ‘Nemo’ was nowhere to be found. So I was rapped when our guide pointed out the small fish hiding in the anemones. Initially I didn’t recognise them as they were a brown colour not the orange that I was expecting, this was due to the loss of colour perception at depth. After seeing our first Clownfish they were a regular appearance on future dives and even when snorkling.

I wasn’t paying too much attention to navigation, relying on our guide to keep us on track but it wasn’t long before I noticed we had somehow made it back to the top of the reef and our guide was signaling us to head up to the 5 metre safety stop bar attached to the boat. While undertaking the safety stop an alarm on my dive computer went off and when I checked it I was surprised to find that 45 minutes had elapsed.

Once back aboard we slipped the mooring and headed to our next dive site, Mele Reef. The transit time was taken up with the now familiar roll call, swapping tanks and a hot cuppa and cake. There was a bit of a delay when the boatman couldn’t find the right buoy to indicate the mooring, but this wasn’t a problem as it increased our surface interval, thereby giving us a longer bottom time for the next dive. Maybe a chartplotter would be a good investment.

The Mele Reef dive is described as an extensive reef that rises up in the middle of Mele Bay to around 8 metres from the surface. The plateau is host to a large vareity of reef life including batfish, clown triggerfish and white tip reef sharks. The verticle wall descends to at least 35 metres and has interesting gullies and alleys to investigate along the way. I would have to say the description is accurate although we didn’t see any white tip reef sharks on any of the dives we did in Vanuatu. I have come across them on dives in Samoa and Rarotonga and they are nothing to worry about when you do see them as they usually keep their distance. As with ‘Ollie’s Lolly’ there was more evidence of the effect of the February cyclone. Despite this there were still some stunning examples of fan coral to be seen.

On all the previous dives I had done on this trip, all the ‘items of interest’ had been pointed out by our guide, so I was over the moon when I noticed (I almost typed spotted) a moray eel peeking out from a crevice in the coral before anyone else had. I hadn’t seen one of these before and it didn’t seem to be perturbed by my presence. The markings are quite stunning and despite those razor sharp teeth they are still a beautiful fish.

with all of the other dives we had done in Vanuatu, this one achieved a maximum depth of around 25 metres and was followed by a two stage safety stop regime. Once back aboard and all divers were accounted for we slipped the mooring and headed back to Port Vila. The ‘Cowrie’ isn’t the fastest vessel around and we had plenty of time to reflect on another great days diving before it was time to unload and rinse our gear.

Nautilus Watersports do their two tank dives in the morning and their single dives in the afternoon, so our fifth and final dive of the trip started at a leisurely 1230hrs. When we turned up there was a group doing a ‘Discover Scuba’ course in the pool so we busied ourselves preparing our gear for the dive. The crew were putting a few sets of gear on board as well and as soon as we were ready, the ‘Discover Scuba’ course got out of the pool and straight onto the boat. The ‘Twin Bommies’ was not far from Port Vila harbour and our transit time was taken up with the now familiar safety and dive briefs as well as getting suited and booted. The site is described as featuring a sheer wall as well as two ‘bombora’ formations riddled with grottos with the depth ranging from 10 to 25 metres over the edge of the drop-off. Most species of tropical fish can be found at the site and they are comfortable with divers and not afraid of flash photography.

After dropping into the water we descended down the mooring line to the top of the reef at 10 metres. This was where the ‘Discover Scuba’ crew would spend their time but we headed over the side and made our way slowly down the sheer wall to the now familiar 25 metre mark. This provided an awesome feeling of freedom as in places we could not make out the bottom below us. This is where the true feeling of floating in space comes from and is something that I have not experienced often while diving as we made our way along the wall our guide pointed out items of interest such us some delicate soft corals and other marine life.

At one point my son got my attention and was pointing to something. I couldn’t work out where he was pointing until I just about swam into a Hawks Beak turtle feeding on something in the coral. The turtle was totally oblivious to us as he devoured its meal and we must have stayed and watched it for at least five minutes 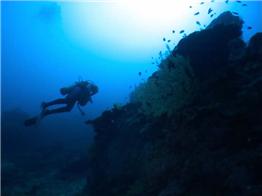 We soon ascended to the top of the reef again and made our way to the two Bommies that give the site its name. There certainly was a large variety of colourful fish and marine life around them and although I asked the guide what they all were when we were back on board, I can’t recall what they were.

All too soon the dive came to an end and we were making our way back to Port Vila harbour. On reflection, I would have to say that the variety of dive sites and marine life around Port Vila far exceeds that of any of the other islands that I have dived. The value for money was excellent and we barely scratched the surface of the diving opportunities in Port Vila itself let alone the rest of Vanuatu. I would also have to rate the safety systems and procedures used by Nautilus Watersports as the best I have experiences overseas and would thoroughly recommend the to anyone holidaying in Vanuatu.

This site uses Akismet to reduce spam. Learn how your comment data is processed.

A Bit about Scuba Diving Vanuatu